I launched a beta version of my inner wisdom course in January 2017, and didn’t really feel great about how my students seemed to experience the course. Some met their inner guides, others didn’t – and no matter what extra support I gave them, they kept coming back with struggles.

So I wanted to create a new version of the course that would bring my students better results, and included more support in case they got stuck. I was really uncertain if I would be able to do this; the mixed results of my beta version made me quite nervous I might not. 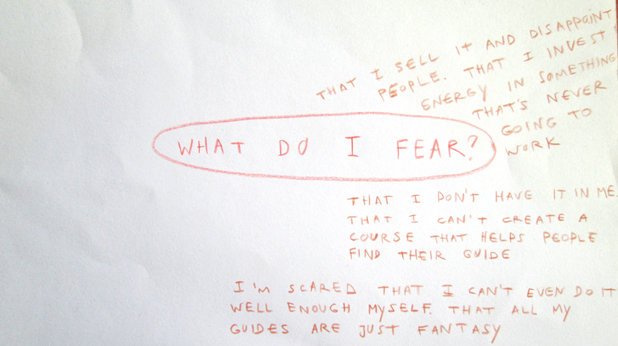 But with a lot of inner work, and strengthening of my own inner wisdom ánd confidence (something my coach Joanna Hennon helped me with a lot), I was able to create a new version. Or actually more so: a new course. Much deeper and supportive than my original version.

It was finished by the end of August (much later than I had planned/hoped/allowed myself), and I started to get ready to launch in September/October.

But then I sort-of broke up with my boyfriend two weeks before the launch would go live.

Why the timing? I don’t know. It felt so unpractical in all kind of ways, but it was as if I didn’t really decide to break up. It just happened through me.

At first I felt (although having panicking moments) quite good about the break-up. I saw how it was for both our highest good, and I trusted that if we were still a great couple together, we would get back into a relationship some day in the future. But right now we needed to come back home to ourselves.

So I thought, “Let’s just continue my launch plans. I will be fine enough to work.”

I tend to always underestimate these things…

My strategy was the same webinar strategy I always use. I updated the webinar from my previous launch, and wrote new e-mails because the old ones didn’t really fit with my new messaging any more.

What I added this time, was an attempt at a pre-launch. I interviewed two peers and myself about intuition and published these videos on my Youtube channel, to show people that everyone has it in them to develop their intuition – even if you think you’re not special enough.

I also wrote about three pre-launch emails to warm up my list around the topic of inner wisdom, and sporadicly mentioned my new e-course that was launching soon.

I was also planning on running Facebook ads this time (which is also why my revenue goals were quite high). But in the week before my launch started I was either so stressed or busy every time that I ended up not running them at all. I think there were some underlying reasons too I think. Fear that they wouldn’t convert and I would only lose money on them.

So once the registration for my webinar opened, I started to panick. Until that point I felt quite trusting that I would create a €10.000 launch, but suddenly I thought: What if I can’t make it happen? What if this launch fails and I have to deal with both a break-up, a failed launch and financial problems? :S

During the entire launch I’ve been able to connect back to my trust in moments, but that fear never went away completely.

And it was really hard to deal with it, because it basically meant I was already trying to deal with a break-up + failed launch + financial problems.

What helped me most was to listen to empowering music and movies – boosted by some weed if nessecary. As you might have picked up by now, Moana en Barbie Starlight Adeventure are what I watch somewhat on repeat during my launches ;)

I also cleared the chakra’s from this course, and did other energy work that I just did as I came up with the ideas to do so. In this energy work, I sent out invitations for 70-200 people to join my course. It feels somewhat hard to deal with the reality that a different number of people signed up. It’s easy to then doubt my energy work: was I just making it up?

I think there’s more to it then that but can’t really understand it all at this point.

What I always find hard in launching, is not meeting the numbers I hoped for. And this was often the reason why I would go back to that fear of a failed launch. I had hoped for 1400 registrants and got nowhere close – especially in the beginning when sing-ups were quite slow.

And a webinar conversion of 2.8% feels like such a failure as my previous webinar for this course had a 4.6% conversion – and that was 6 months ago when I was so much worse at marketing! The price increase (from €77 to €149) might have been an influence though.

I feel quite good about the fact that I made my €5000 goal, and it’s a lot of money too :) But when I look at those conversions… I honestly feel like I REALLY suck at marketing.

In my first year of business, my after-launch state would often be a light depression. This second year it’s been two on-top-of-the-world launches, but mostly I feel very mixed about my results. Excited and unsatisfied at the same time.

So first of all: congratulations Luz, for being able to do all this under your challenging circumstances! :S

I also feel great about how often I was able to come back to a trusting place again. My cart close was a really happy day in which I listened Barbie songs and dreamed about my wealth all the time.

And to tell you something freaky… The last few days of my launch, I would switch a lot between ‘This is never going to work’ and ‘I’m having a 10.000 launch this is so amazing!!!!!!’. Whenever I spent a few hours in that optimistic, trusting mood… more sales came in. And they happened way less frequent when I felt down. Wow! Maybe the energy/vibration stuff does impact things!

Oh and I almost forget to mention: Holy Moji, I had my first 5K (internal) launch!! Feels like an amazing milestone.

Lastly, I feel really great about the progress I made with Facebook ads – even though I ended up not running them. I somehow allow myself to take this step by step. During the virtual summit launch I decided to give FB ads a try. For my previous launch I watched one tutorial and then left it. This time I followed a whole course and set up my FB pixel. So who knows, next time I might be ready to try out a few ads :)

Oh I seem to always stress about sing-ups! So next time I want to keep a day-to-day score of how many people sign up for my webinar or challenge. Just to show myself that having little people in the beginning, doesn’t mean you end up with a low number of registrations. After my first invite I thought I would never get to 1000 registrants, while as you can see I got really close to it.

I also want to be clearer on the path of my pre-launch. This time I created just piece after piece, and felt really confused by the time my registration started what I had and hand’t shared yet. I think the pre-launch will be much more valuable if I create a clear journey that people take through the content, leading them from A to B to C to my webinar. It was too random this time.

And this specific webinar is up for some tweaking too. I can’t tell yet what was wrong with it, but during my presentation I felt that some things were off.

For a long time now I also would like to add my Facebook group to my launch. Just as with Facebook ads, I have the strategies on how to do so but I just can’t find the time or inner peace to do it during my launch. So I want to look for ways I’m able to get more done during my launch and add more of those extra elements besides just a webinar or challenge and my emails.

Maybe it will be easier too to implement those things when I do a re-launch, and don’t have to create (almost) the whole thing from scratch.