The evening I fell apart 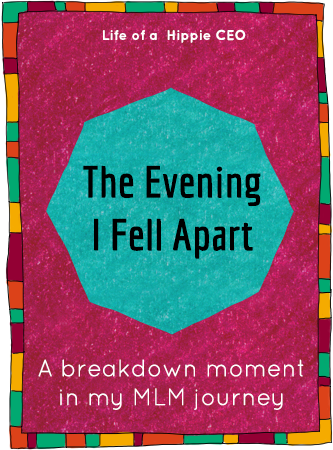 This Sunday I visited my hippie-music-artist friend to tell him about the Light Millionaires project, which he was very interested in. We had really nice contact, even better than previous times we’d met. Nonetheless, when I left I felt quite empty. Another friend had joined the conversation and was so sceptic towards the whole compensation model… He was convinced that Multi Level Marketing was unethical.

After that appointment I had to travel to Nijmegen, to my friend Lieke with whom I would travel to Trier (Germany) the next day. At the train station I decided to first call my sister. I wasn’t feeling thát bad but I could use a little support so I wouldn’t feel so drained anymore.

She didn’t answer her phone and suddenly I felt so alone.

I also had to call my boyfriend, because we have a reflection moment about this project each Sunday evening (I’m his coach). I didn’t feel like it, but I thought it was important to stick to the schedule and called him anyway.
‘So, did you invite the people you said you would invite?’ I asked.
He hadn’t.

All the compassion I had felt for him that day (thanks to the conversations with my hippie-music-art friend) vanished within a blink of the eye. I couldn’t believe it! We had discussed this so clearly! And as you might know it wasn’t the first time he didn’t keep his promises…

To make it even worse, a few days before when he had told me he would invite 6 people, I had been very sceptic: ‘You didn’t do it last time you said you would… so why would it be different this time?’ But he assured me that YES, this time it all would be different.

So I tried not to show my rage and disappointment, en be a proper coach. ‘What do you need to be able to invite them?’ I asked. And it made tears well up in my eyes. Because when I asked that question, I realized how much I needed me to ask ME what I needed. After the conversation I couldn’t help but cry, tried to call my sisters a few more times but she still wasn’t answering. I felt so terribly alone.

An even more horrible man

I slowly started to walk in the direction of Liekes home, and when I crossed a bridge I decided to stand still some time and watch over the city. I felt way to emotional to be able to meet Liekes parents and all that kind of stuff. I stared in the dark, trying to pull myself back together, when I started to realize there was a man hiding in the bushes nearby, jerking off!

I freaked out and walked away, but when I passed the bushes he climbed out of them. Which made me freak out even more because now it was clear he had been focused on me. By the time I had called Lieke, I could barely speak. I’ve never had that happen to me before; I was so freaked out I almost froze. I just cried a little and word for word tried to ask her if she could come over here NOW.

We were still close to a sort-of busy crossroad, which gave me a little sense of safety. But I didn’t dare to move any further to Liekes house because that street was quiet and dark. While I was waiting for her to come meet me, the men kept cycling trough the street, passing me again and again. It was so creepy.

After a few minutes I saw Lieke running in my direction. When she hugged me, all the fear left immediately and I slowly started to process what had just happened. When we arrived at her home, it was a very hectic environment. Lieke had to pack stuff, her sister was playing the violin while the TV was on and in the meantime her mother was trying to stop the violin playing. There was absolutely no space to sit with my feelings.

The costs and ‘benefits’ of not caring for myself

The week that followed, the lack of self-care I had experienced this evening, triggered major doubts about the Light Millionaires project. I didn’t feel so motivated anymore. I was wondering why I was doing this if nobody really cared for passive income or supplements.

And I felt so bad that I had put so much attention to my boyfriend while I actually needed to take care of myself.

A little note about that, by the way: some weeks later my boyfriend and I discussed this evening. He said that if I would have shown my feelings during the conversation we had that Sunday, he probably would have felt so disappointed in himself that he would have quit.

That put everything in a different perspective.

Still, next time I should take care of myself first before starting a coaching conversation.