‘Let’s Get Your Motivation Tested, Darling.’

So I was in total excitement en renewed hope for my health, picturing all the people who I was sure would LOVE to collaborate with me in the Light Millionaires project.

I knew that friend who had been poor his whole life (oh wait – what if I helped his mother get financial freedom too?!), I knew that woman with a drive for entrepreneurship and freedom but who’s company wasn’t making much money at the moment. I knew the guy struggling with his studies. I knew my best friend who would surely just want to participate in something I had so much trust in. 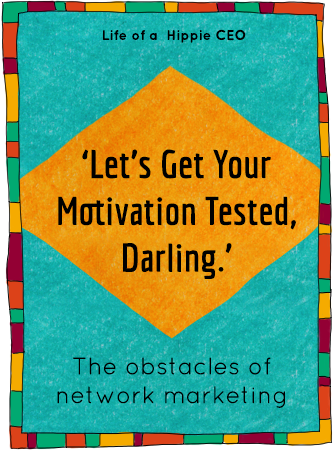 I first told my best friend and she just replied with abstention and reasons why it wouldn’t work for her. I texted my ‘poor’ friend and he didn’t reply. I texted my study-struggling friend and met up with him to talk about this. Appeared he was just the same pessimist as always and didn’t want to get involved in this because it clearly wouldn’t work. I messaged my entrepreneurial friend and she told me that she didn’t like MLM (i didn’t even know what that word meant at the time) and didn’t want to give it a go. That it would cost way too much time and that I myself would be better off investing that time in my own company. Ouch.

Dealing with a demotivating environment

The first thing that network marketing taught me was how to stay motivated when the whole world seems against you.

In my first week I got so many sceptic reactions from friends that it was hard not to dive back into bed and just stay there the whole day. I started to blame the lack of support from my upline and get jealous at my sister who was already having a few people signing up and seemed to be in such an advantage because she lived in the part of the Netherlands where all the meetings and trainings were being organized.

I even felt some resentments towards people who had said no. It felt like it was a no to me personally, because it was easy to perceive the reality as ‘because they don’t want to get involved, THEY are limiting MY growth.’

It takes strength to step away from that perspective, trusting that there would be enough better-fitting opportunities for my growth. And especially in the beginning, before having any success, it was too hard for me to do.

Where did I find the motivation?

1. My Why
First, there was my Why. If this project was going to work, it brought SO many benefits… it was just not something I was going to give up on easily.

2. Support
Besides that it was a tremendous help to be doing this together with my sponsor/sister. We had endless phone calls, supporting each other when we felt demotivated. Knowing that she had that same fire burning inside, gave me some trust that there needed to be more people out there who’d want to give this a shot.

And I knew that me and my sister together made a strong team that could keep going a long time before giving up.

3. Witchcraft
Thirdly it just felt like I was a little possessed by this project… still not sure if that’s a good or a bad thing. In these first weeks I just couldn’t stop thinking about it! In my last diary pages, I have written multiple times: ‘I just want to write my diary and get my emotions on paper, but I keep getting distracted by ideas about the persons I would like to have in my team, and the made-up dialogues I have with them about this project.’

It was crazy! Sometimes I felt like I really needed a break from all this and I just couldn’t because enthusiasm and plans and ideas kept coming through!