Let go of plans… and celebrate!

All of a sudden it starts to happen! There is an upside to my horrible Blitzday. 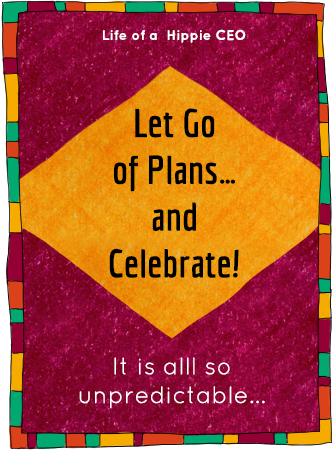 I now have three people in my team, of which one (my boyfriend) also wants to participate in the business part of the project. The other two are just trying out the products for health reasons.

Thank God that somewhere in this process I dropped all my plans – it’s so much more fun this way. Maybe I was able to do it because I eventually did get three people to join me and they definitely weren’t the ones I had expected to, or thought of first.

I even remember my sister asking: ‘And your boyfriend, does he want to try this out?’ To which I replied: ‘I don’t know, I told him about my own experiences with the project but actually didn’t ask him at all if he was interested in joining. I don’t think this is for him and he doesn’t have the money to start using the products anyway.’

The story of my boyfriend joining is actually even creepier than that. In the week before I got my two last teammates, I had a few major crying sessions triggered by this project. My boyfriend was around me while every single one of them happened. And every morning after my darkest moments in this adventure, he would tell me he was getting more enthusiastic about it. WTF!

I think because he’s my boyfriend he accidentally ended up having 10+ exposures to this project and yeah the more exposure people have to something, the more likely they’ll see if and why it’s good for them and they’ll go for it…?

And men, what do I feel motivated by finally having three people joining me! :D I still cannot believe it totally…. but it starts to get real now! I can actually get people in my team!! And I can start coaching my first business partner…so excited!