A quick note: all the persons I write negatively about in this article, are still amazing people that just couldn’t meet my needs at certain moments. I left out a few parts in this story where my sister was a tremendous help for me in the Light Millionairs project and don’t want to give you the feeling that she is a bad sponsor. She’s great, she only couldn’t be everything that I needed. 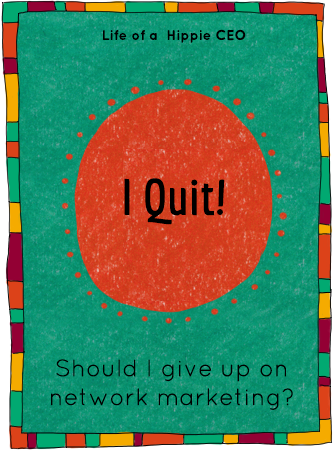 My sister called me. Actually to check in with me and give me support, but the contrary happened. Her new team member knows the famous Steve Pavlina and is planning on asking him to join her team. ‘Can you imagine?’ my sister said, ‘Steve Pavlina in my team, how awesome!’

Back were all the feelings of jealousy – and that wasn’t the first time in the past week. Bianca, my sisters new team member, had signed up three people within two weeks. I felt happy and jealous towards her, and happy for and jealous at my sister for having such a great team member.

To make it even worse, my sister told me that she really couldn’t be much more available for calls because she was just not able to adjust her life so much. I felt so alone, and with the doubts I already had about this project, all I could think was ‘whatever, just leave it. I’ll just stop doing this stupid project…’

After we ended the call I started to cry and realized how painful the conversation had been to me. It all seemed like little things, but they were too much for my vulnerable heart.

I almost start to get used to it. (Seriously, lately there has been some calmness in me while I cry. It feels more as if I am letting the pain out rather then as if I AM the pain.)

Is this worth all the shit?

I felt so sick of all of it. I felt angry at the whole culture in this organization. I felt angry at people who don’t know what their true enthusiasm is. I felt so restrained by having to coach people and organize meetings with them and by all the guidelines described in the books and meetings.

I felt like all this was way too much effort for what it was bringing me. Some shadow work – okay. But wasn’t I just hurting myself by trying to make this work? I felt so resentful that other people seemed to have success with so little effort, with the business part ánd with the detox.

Why did I want to make money this way? I felt so little freedom, while that should be one of the main reasons for starting this project.

And it didn’t feel steady at all. Teams can collapse within a second. Income can decrease by thousands in just one month. Why did I do this? Wasn’t building my own company giving me much more freedom and stability? Wasn’t building my company actually easier than this??

And that’s when something happened that I thought would never happen: I quit.

It felt as such a relief. I almost couldn’t believe it. I thought it would be so painful to quit. I thought I would feel like…well… a quitter.

But I didn’t! I felt like I wanted to celebrate! I felt victorious!

There was a fear in me that everyone around me would get so fucking rich with this project the coming years and I would, again, feel like I had made the wrong decision. But did that really matter? I already felt like that when I was still in the running.

Quit… or just fire the boss

The strange thing is, in that bright moment of letting it all go, I felt that I didn’t want to. That I would like to continue with this project, but just more on my own terms and at slower pace. The just-let-happen-what-happens pace.

I didn’t want to put effort in looking for people anymore, I wanted to send out a signal that would make people start looking for me instead! Like this blog and naturally occurring conversations with friends.

I decided I wanted to work with this project as if it were a hobby. Only doing what I liked doing, and leaving the rest. No matter if that would mean leaving money on the table. Glad to keep it there! My happiness matters more.

And men… I do feel so relaxed by the idea that this is how I am going trough this adventure the coming time! I’m just going to lean back and see what happens :)

(And yes dear Universe, the intention of 4 business partners before the end of October still stands ;))