The Dark Side of Network Marketing? 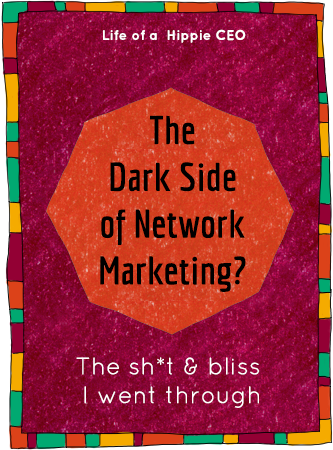 The morning after the Starters day I was laying in my boyfriends bed crying all over the place. I can’t really remember how my emotions got triggered, but somehow the Light Millionaires Project brought me back to a painful childhood drama that sort-of summarizes my pain in sisterhood.

When I was seven years old, our family went on holiday together with two friends and their kids. Their two daughters were somewhat older than me and my sister, and they we’re clearly liking my sister much more because she was younger and thus cuter.

One evening in a hotel room, they wanted to play a game with us. They would hide in the closet and first I had to knock on it. ‘Wooooh, I am the bad ghost’ one of the girls would scream while she came out after I had knocked on the door. I can’t remember what the bad ghost did, maybe it was just a funny thing. When my sister knocked on the cupboard, the other girl came out, pretending she was a good ghost who was putting glitters and magic all over the room.

Can you imagine what an imprint it left on me? Poof, here’s some beliefs for you Luz:
“I am not worthy of any good in life.”
“My sister always gets all the good stuff and there’s nothing left for me.”
(Or maybe I was already carrying those beliefs with me and this was just a manifestation of them.)

The strange thing was… after hours of crying I wanted to write in my diary about it and when I opened it, there was a picture of two doors. It seemed so similar to the door of my memories; one good, one bad. It had a quote of Lao Tse on it:

“What seems to be a disaster, often appears to be a chance.”

I tried to heal this memory by visualizing that I opened the door which had the good ghost behind it, bringing me all the good stuff and telling me I deserved it. For a few hours I actually thought I had succeeded.

A Blitzday is a day where you meet with people in your team/upline/sidelines and start messaging as many people as possible within 3 hours. I didn’t know that when I signed myself up for the day, organized by Wietze, my diamond upline. (Diamond means something like super-duper successful with referring the Hippie Health Company.)

This particular day, that was scheduled right after my crying session earlier this morning, I was full of confusion and doubt around this whole project. And I still felt like a fragile help-needing little kid; there couldn’t have been a worse timing for a Blitz. If I’d known before what I was about to do, I would just have told everyone I was sick and stayed home.

So yes, messaging as many people as possible. ‘But to make it more interesting,’ Wietze said, ‘we’re going to add a competition element.’ We got divided in two teams, I was in one and my sister in the other. The team that had the most appointments after the three hours, would get a price. The other team would have to sing a stupid song as ‘friendly penalty’.

Reaching out for help

Oh Gosh… I was in such distress. I didn’t feel like messaging anyone AT ALL because at that moment I wasn’t clear about how I wanted to talk about my project. But if I didn’t message it would mean I let my team members down…

I took a deep breath and decided to get myself some help, although it felt as if there was totally no time for it because everyone needed their time to start messaging. I went to Wietze and Patrick (Roberts sponsor) to talk about my doubts.

They tried their best to help me out, but it was all very hectic and it only made me feel a little bit better. They were very focused on getting me enthusiastic again, while I actually needed someone to listen to how difficult it was for me and how annoyed I was that all the events that were being organized were so far away from my home.

By the end of the conversation I still felt so mixed up. In one way fuelled to completely go for it and be the pioneer who’d bring the Hippie Health Company to Groningen – but in another way too confused and hurt to take any action at all.

It was however great to finally receive help from my upline, something I’d missed for a long time.

I felt very uncomfortable asking for it, but I went up to Patrick to ask if he wanted to do a talk in Groningen so I could use the blitz to invite my friends for that event. He said yes but it felt very uncomfortable to be asking so much from a stranger. (Are you also starting to notice the themes this project confronts me with?) It even seemed like Patrick and his girlfriend got into a discussion about whether it was okay or not for him to help me out with this, which made me feel even more awkward.

Then all the other stuff that could go wrong, did. I found it hard to find a place to sit in the crowded room, and didn’t feel very welcome wherever I settled down. For the first 1,5 hour I didn’t get my laptop to connect to the internet so I could only use my phone for messaging. I don’t have Whatsapp which felt like a big disadvantage, and I didn’t have that many peoples mobile number.

A friendly penalty…in your face.

It’s hard to describe how terrible I felt for 3 hours straight, although it did all get a little bit easier once I started to build momentum and also got some positive reactions.

That’s of course why those Blitzdays are being organized. They are a good thing for building momentum and it did bring me quite some appointments in the weeks after the Blitzday – which on itself was motivating. But definitely not on that moment.

So here’s the big finally of the story: my sisters team won with just two appointments more. It didn’t feel completely right though because we had less people in our team; we would get a someone in our team who would come later in the day, buy she didn’t show up at all. Which meant that our team had actually more appointments per person than my sisters.

One of the people in my sisters team just got appointments by meeting up with people without even talking about network marketing at all; she would just do that once the appointment was there. Well, yes…that makes it quite easy to get 10+ appointments… It didn’t feel right however for me to make appointments this way.

I’m not telling this to complain about the organization or anything, but to show you that to my hurt inner child it all felt quite unfair. And did I tell you that my sister and I actually made the same amount of appointments?

It was right in my face: she always get’s the good stuff in life.

Normally these contests just have silly prices and it doesn’t matter anyway. But this time everyone in my sisters team got a free ticket to a Starters day! Which is just like winning €10,-!

I also thought losing wouldn’t be as bad as it appeared to be, although I do have a fear for public singing. I thought ‘okay, let’s not act childish about this, just sing that stupid song and get it over with.’ But while we were singing, people started to film it! I felt so fucking humiliated. The filming changed EVERYTHING. The feeling reminded me of those scenes in movies where children get bullied in high school, though of course no one was having bad intentions here.

I guess it’s unnecessary to note that after the Blitz I felt ten times worse than before, and before I already felt like being on the verge of a breakdown.

Doesn’t the bad side need a little acknowledgement as well?

What bothers me, is how everyone in my upline only seems to talk about how good this whole thing is.

Yes, there is a lot of good stuff about all this. Yes, it is amazing. Yes, it has got me totally excited.

But it also has got me crying and desperate and feeling defeated and discouraged. And I want some attention for that side of this journey as well!

If I’m ever going to have a big team, I’m going to organize sharing sessions at my house where all my teammates can tell about their struggles and questions and what they need help with. And then we’ll all be there to support them, in addition to the regular support their sponsor will give them. Afterwards we’ll celebrate our successes and courage and get ourselves excited to get back on track again. But only after the pain has had the soothing and care it needs.

I hear again and again that community and support is a very important thing for the people referring the Hippie Health Company. Together with health and money it’s one of their three pillars.

And sometimes I get a lot of frustration that this beautiful story doesn’t seem to be matching with my experiences. But I don’t want to put the people invlolved in bad daylight. I think they all really are good people who have the intention to show support and of course I did get to see some of that on the Blitz as well.

I am wondering how much it is just bad luck and coincidence, and how much the universe is bringing me this particular experience to learn from it. How much it is about me and not about them. But whatever the reason may be for this happening, it taught me one thing: I am determined to give my team all the support they need, so they don’t have to go through the same experience.

Quick endnote: I almost start to feel ashamed of how much I am defending everyone during this whole Light Millionaires story… Men does this confront me with myself! “I may never speak badly about other people.” “I must make sure I am pleasing everyone.” “I may never feel hurt or sad or angry.” Sigh… It’s good but it’s difficult.