In the week that followed my second Starters Day, Valerie and I joined for a gameplan interview, after which we had a Skype appointment with Bart who wanted to give us some extra support (maybe I was finally getting rid of my blocks to receive help from the upline?).

Valerie decided to go for €850monthly passive income by August, which meant she had to build her team quite fast. But she was totally in for it, she even seemed more driven that I was. I couldn’t believe it! :) 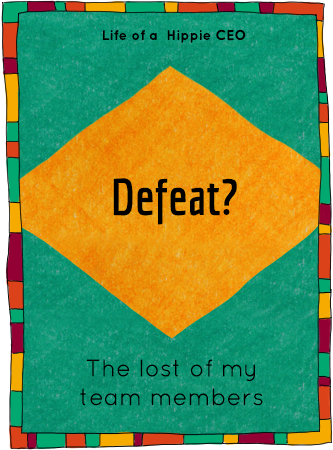 Minus one team member

And maybe… I should have shouted a little less that I couldn’t believe it. Because the next day I got a phone call from Valerie, telling me that she felt very sorry but realized that this network marketing thing wasn’t for her. Her life was already so busy, she felt insincere while doing it and she had just been taken away by the enthusiasm of the Starters Day – which wasn’t hers.

I was still in a really good universe flow and wasn’t really disappointed by it. That Friday I still felt so much trust that I would find my 4 business partners for October, and that apparently she wasn’t the right fit. But I wanted to take an immediate action to keep myself motivated, so I messaged Gerjo, the guy who brought this thing to the Netherlands.

The night before I had gotten the idea to interview all the Diamonds (= super duper successful people) in the organization, and to bundle those interviews in an e-book that could be a very valuable new tool. To be honest, I was quite proud I had come up with such a good idea and messaged Gerjo to get the contact details of all the people I wanted to send an interview request.

And I guess I’d hoped for his acknowledgement. I wanted him to tell me what a good network marketer I was for taking so much initiative, like I wanted my teachers in high school to acknowledge what a good student I was.

But I didn’t get it; the next morning he replied that he wasn’t available at the moment and that I should turn to Wietze for my questions. My really good universe flow started to wear off a little.

Minus another team member?

Later that day, I got into a huge fight with my boyfriend again. I told him to leave my house and I thought: there goes my last team member… He didn’t quit but at that moment I didn’t see how we could ever work together in this project; he wasn’t taking any action so how would he ever build a team? And how would I ever be able to not get mad at him for it, but be a good coach?

In total despair I called my sister – who didn’t answer.

Something inside got broken that afternoon, and it didn’t got repaired when my boyfriend and I made up. A new era began in my Light Millionaires journey: an era of doubt, confusion and uncertainty. An era of looking deep within, instead of searching the outer world for team members. An era that, at first, I perceived as defeat.