…And the day it all came together 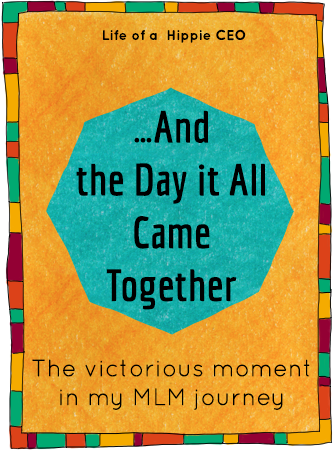 Skip forward to the Sunday after my Breakdown Sunday: Starters Day number 2. This time I went to accompany my boyfriend and quite unexpected, Valerie joined too. So far she had only been using the products and wasn’t interested in the passive income part. But she had told some friends about the positive results she had experienced since starting with the supplements, and now she felt obligated to find out more about how to sign people up in case they wanted to.

Being a princess and an overworked mom

I felt like a princess in there! At my first Starters Day, I had been visualizing how the next Starters Day, my first team member would be sitting next to me. And now I had two of them, surrounding me on both sides!

But besides feeling like a princess, I also felt like an overworked mom with two children whom both needed attention and often at the same time. (How do parents do that? It’s crazy!). The Starters Day can be very inspiring, but also confusing. Valerie got very excited by it and I wanted to be available for all her questions and action-planning. My boyfriend on the other hand needed some more emotional support. Juggling between those two, while trying to meet as many new people to learn from as possible, was quite difficult.

At the same time it was a transforming day for me.

It’s all about the coaching

I got a huge eye-opener on how important coaching is. I spoke to a woman who had seen her whole team collapse because of a lack of support from her upline, which made her unable to give her team members the support théy needed. I got to know Bart (one of my upliners) better, who had also lost half his team at a certain point – lack of support.

Maybe… in this referral marketing journey, coaching is a more important skill to posses than the ability to get new people in your team.

It may sound a bit funny, but it was also very motivating for me to discover that almost everyone had had a point in their journey where they were about to quit. They all had had doubts – but they were still here and again back on track with growing their passive income.

The whole atmosphere on Starters Days is so focused on the positive side, that I almost started to think it was actually easy for people to do this – and thus there had to be something wrong with me for struggling so much with it. It was a great relief to know that this wasn’t the truth.

The courage to be me

Because of the Starters Day, I also realized how much more empowered I had become in this project. Had I been confused last Starters Day by everything that didn’t resonate with me – this time I was picturing how I would do it differently myself if I would organize my own Starters Day. This time I had the courage to break with the settled way of doing, and start building MY team in MY way!

During the lunch break, Valerie told me she was very glad that she was in the team of me and my sister, because we would do it all so differently. What a compliment! :) And what a joy I felt that by the end of the day, she decided to become an active business partner. We planned a gameplan interview a fews days later to get her started up. My second business partner was a fact!

A few days later I got a message from Eveline, a girl who’d been to the meeting my sister and I had organized. She said she was very enthusiastic and probably wanted to join in this project by the end of November.

Wow! It was midway October and I had already found 3 of the 4 team members I wanted to attract this month! Universe manifesting magic was really happening! At least, that’s what I thought before a series of misfortune happened…